Visit with us the majestic temples of Edfu and Kom Ombo and let the history of both these temples be explained to you by an experienced guide or visit the Temple without a guide.

Depending on the number of participants, you can make this excursion in a taxi, minibus or a “Coaster “, all with air conditioning.

In any case, you always make the trip with your own private driver and guide, because large impersonal groups are not “Our thing “.

You will leave from the hotel at seven o’clock in the morning, after which you will drive to Dendera and Abydos. In the evening around 18.00 you will be back in your Hotel.

The price for this excursion depends on the number of participants and the rates prevailing at that time in Egypt. You can request the price for your company by using the following application form excursions.

A bit of info about Edfu and Kom Ombo 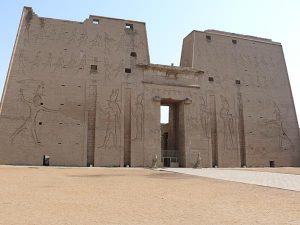 Edfu (Egyptian Arabic: إدفو‎ pronounced [edfu], Coptic: Ⲧⲃⲱ vars. Ⲁⲧⲃⲱ, Ⲧⲃⲟ (Sahidic); Ⲑⲃⲱ(Bohairic); also spelt Idfu, or in modern French as Edfou, and known in antiquity as Behdet) is an Egyptian city, located on the west bank of the Nile River between Esna and Aswan, with a population of approximately sixty thousand people. For the ancient history of the city, see below. Edfu is the site of the Ptolemaic Temple of Horus and an ancient settlement, Tell Edfu (described below). About 5 km (3.1 mi) north of Edfu are remains of ancient pyramids.

The city of Edfu, located in Upper Egypt on the west bank of the Nile River, was a flourishing Greek city in ancient times and was commonly known as Apollinopolis Magna, after the chief God Horus-Apollo. Today the city rich with history is a friendly and commercial town. Locals produce sugar from farm-grown sugar cane and decorative pottery.

The temple, dedicated to the falcon god Horus, consists of elements of both Egyptian temples and Greek architecture. A tour through the Temple of Horus unveils an entrance, a court, and a chapel with scenic inscriptions on the walls depicting the birth of Horus the child and other Pharaonic deities who were concerned with this pregnancy and birth. The temple’s entrance contains a Pylon, the highest surviving in Egypt, which is 37 meters high and decorated with battle scenes. Just past the Pylon is an open courtyard that served as an offerings court, where people would bring their offerings to the statue of Horus. Columns border the court with floral engravings on only three sides. Beyond the court of offerings are the Hypostyle Hall, the inner Hypostyle Hall, and two consecutive vestibules each of which are decorated with various scenes representing battles, deities, marriages, or offerings.

The significance of the Temple of Horus knows no bounds. Archeologists and historians have come out with bountiful information on language, religion, and way of life during this period in ancient Egypt.

Dedicated to Sobek and Horus the Elder, the Temple of Kom Ombo has two identical entrances, hypostyle halls and sanctuaries.

The symmetry of the temple layout is a tribute to the mythical link the two gods shared. Built on an outcrop at a bend in the Nile where crocodiles used to gather in ancient times, the temple is a testament to the importance Ancient Egyptian priests placed in the natural cycles and crocodiles of the Nile.

Visit the temple to see mummified crocodiles, clay coffins and spectacular reliefs on the walls.The temple can be reached on your way from Luxor to Aswan on a Felucca ride or a Nile Cruise, or on a day trip from Aswan.